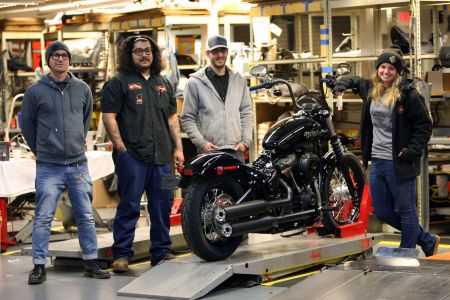 The ultimate customization contest is back and better than ever – the Battle of the Kings is on! Harley-Davidson is the leader in customization.  In honor of that legacy, Harley invited all U.S. dealers to build the ultimate customized motorcycle and compete with an elite group of custom  builders for the title of U.S. Battle of the Kings Champion. Along the way to crowning the U.S. winner, customers will be voting to determine the People’s Choice Winners. After Round 1 - People'e Choice, the entries will face a panel of judges for the next three rounds to determine the U.S. Champion. The U.S. Champion will then go on to compete at a global level against other country winners for the chance of being crowned the Global Battle of the Kings Champion.

First, we have the option of customizing a new or used 2017, 2018 or 2019 Harley-Davidson® bike of our choice (excluding CVO™ and Trike) in the style that falls within one of the following categories: » DIRT: Tracker, Scrambler & Desert Sled » CHOP: Bobber, Traditional & Hardtail » RACE: Street, Sport & Track. Red River H-D has chosen a 2019 Street Bob to CHOP, bob, & modify!

Second, we were asked to partner with a local trade school to give the students exposure to our technicians’ creativity, customization prowess and technical precision, while allowing them to participate along the way. Red River H-D has chosen the Career Education Center to share ideas as well as show real world application of H-D mechanics, design, & branding!

RRHD & The CEC of Wichita Falls WILL NEED YOUR VOTE APRIL 15 - May 15  via RRHD.COM BOTK LINK (the direct link to H-D.COM) to make it through Round 1 People's Choice!! With your help, making it through Round 1 & 2 will not only get us a trophy and recognition on H-D.COM but the Career Education Center will also receive $2,000 worth of Snap-On Tools!! Please help us (by voting in the People's Choice via H-D.COM) to help encourage our youth to work hard and see a kick-ass project through as we take our first attempt at participating in BOTK and put forth our best efforts at a completely original bike build! Creative customization is the name of the game and we are in it to win it!!

Watch our build as we give sneak peaks leading up to the much anticipated REVEAL PARTY at Red River Harley-Davidson April 27!!!!