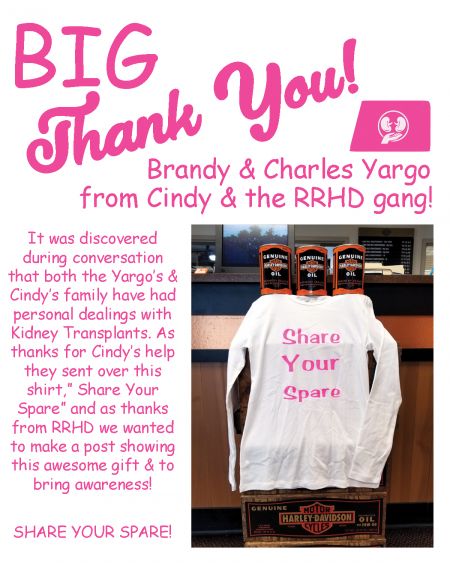 It was discovered during conversation that both the Yargo’s & Cindy’s family have had personal dealings with Kidney Transplants. As thanks for Cindy’s help during their new-bike purchase they sent over this shirt,” Share Your Spare” and as thanks from RRHD we wanted to make a post showing this awesome gift & to bring awareness!

Cindy's dad, my Grandpa who I am so proudly named after, was diagnosed in the early 80s to be in dire need of a kidney transplant. As a matter of fact, he was in the hospital on dialysis when I was brought into this world. If it had not been for the donor who so selflessly donated their kidney a few years later, I would have missed out on the entirety of knowing my Grandpa who lived until his 82nd year. My Grandpa Bob, who many of you knew from RRHD, was one of the most influential voices through out my life and I could not thank or promote kidney transplants enough for without it I would have never known this great man.